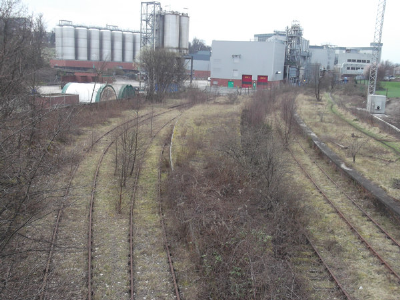 Since passenger rail services to Leven closed in October 1969, several generations of 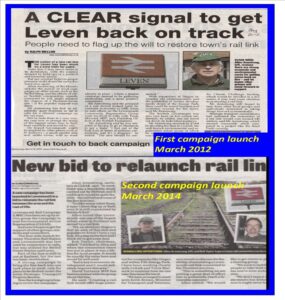 the Campaign in various shapes and sizes have surfaced over the past 50 years. After a significant push in 2008 failed, the latest Campaign was launched in March 2014 (initially by local charity, CLEAR)      The Levenmouth Rail Campaign (LMRC) is entirely community-based and driven by local volunteers living within the rail catchment area. By far the largest settlement in Scotland without a direct rail link, LMRC believes reconnection is vital to the much-needed regeneration of the area. The unjust withdrawal of rail services in 1969 coincided with the closure of coal mining in the area which had formed an important foundation of the local economy. In the intervening decades, Levenmouth’s prosperity has declined significantly compared with other areas.

The Campaign is open to anyone from Levenmouth or the East Neuk to lend their support to this worthwhile cause. The intention has been to push the unarguable case until a positive decision is made to reinstate rail services – the business case is compelling and unanswerable. Rail is the transport mode of choice in the 21st century.

LMRC is not affiliated or linked with any political party or grouping. The reinstatement of the Leven rail link has cross-party support, and widespread support from all sections of the local community and beyond. We reserve the right to criticize and hold accountable any official body or elected representative without fear or favour. Our sole interest has been in reconnecting Leven to the national rail network.

One challenge we face is that Levenmouth has had  a rather fragmented voice. The different towns and villages which adjoin one another have often stressed their individual identities but Levenmouth is now the official title of this area, one of seven areas in Fife and the unified secondary school is now called Levenmouth Academy. The campaign is seeking the reopening of stations at Leven and Cameron Bridge to serve the entire area

1. Why has the rail link been justified?

For local people to travel for work, study, shopping and leisure, to draw in more visitors to the area, and to carry freight to and from major industrial operators in Levenmouth.

Passengers: A total of 51,837 people presently live in the catchment area with plans to add a further 4-5,000 in the near future. Potential visitors from outside the area could double this potential traffic for the beaches and for local attractions (such as Kingdom of Fife Rail Preservation).

Levenmouth is the largest urban area in Scotland – by far – with no direct rail link. (http://www.railbrit.co.uk/schemes/possible.htm).  According to the latest KnowFife data, the Levenmouth area has a population of 37,824 and the adjoining Largo and southern East Neuk for which Leven would be a railhead has a population of 14,013 = a total of 51,837. The Strategic Land Allocation and local Plans for Levenmouth include building another 1,650 houses, swelling this population by a further estimated 3-4000.

The line continues intact to Leven (adjoining Sainsburys), and thence to Methil Docks adjoining the Fife Energy Park. Improved accessibility would support the employment opportunities at the 55 hectare Energy Park investment zone, as well as the proposed Low Carbon Investment Park, Methil Docks Business Park and Fife Renewable Innovation Centre by providing access to a wider labour market. It would also support the workforce for existing employers such as Diageo, NHS Fife, James Donaldson and Sons Ltd, Silberline and Pfaudler-Balfour Ltd. Major logistics company Malcolm, responsible for all Diageo movement, is strongly in favour of rail reconnection and have sought to reinstate services in recent years. They operate a Rail Division and state that they would wish to ship 60% of Diageo input and output to and from Levenmouth by rail.

Finally, there are opportunities to support approximately 150 farm holdings in central-east Fife growing 2,500 ha of fruit and vegetables and fruit to supply UK supermarkets. Possibilities for supplying the huge biomass plant at Markinch have been mooted.

Overcoming deprivation and exclusion: in 2012, the Scottish Index of Multiple Deprivation (SIMD) indicated that 44.1% of the population in the Levenmouth area reside in the 20% most deprived datazones in Scotland, with 18.8% in the 10% most deprived. Within Buckhaven, Methil and Wemyss villages the percentage of the population who are employment deprived is twice the Scottish and Fife average. Reconnecting the area by train will bring easier ways for people to travel to work and study, and encourage more visitors, trade and business investment in the area.

Ease of reopening:  The 5.5 miles of track between Thornton Junction to Leven is already owned by Network Rail, the trackbed (and rails) are intact and with very few crossings and a trial freight train ran as recently as 2003.     The line is still part of the rail network, and appears on Network Rail maps – it has only been mothballed and Network Rail would already have been required to bring it back into use if a freight demand was made. Scotrail also require depot facilities in Fife for ‘parking’ trains for Fife Circle services which this branch section could easily provide.

3. Will a rail link help or hinder other transport connections to/from Levenmouth?

Easing pressure on inadequate local roads :Investment in reinstatement of the rail link will actually help keep heavy goods off local roads, and bring more business in. The funds required for reinstatement will be capital expenditure and not affect other budgets. Road connections to Levenmouth, especially the A911 (Standing Stane) from Kirkcaldy, have limited capacity and are inadequate. Even generally good bus connections are reducing eg the bypassing of Buckhaven, Methil and Wemyss villages by the Glasgow express service. As roads become congested and parking in towns more expensive, Levenmouth residents need better travel alternatives. 31% have no access to cars.

4. How easy will it be to reinstate the line?

The Thornton-Leven line and its extension to Methil Docks is fully intact in terms of trackbed, bridges, and most rails, unlike many other disused lines where the former track has been converted to other uses, requiring costly repurchasing of land.
The line is only mothballed at present – it is still managed by Network Rail.
The first mile of line from Thornton to Earlseat has been used to transport coal from Hall’s nearby opencast site. This means the connections between the branch line and the mainline are already established.
The Fife Circle service which presently terminates at Thornton has already built into its current timetable the time required to make the return journey to Leven.

5. What stations will be opened and what train services will operate?

Two stations will be re-established – Leven and Cameron Bridge. The Leven station site will probably be on land behind Sainsburys or close to Leven Swimming Pool at the town centre. but undeveloped land exists all along the corridor in Leven to Methil Docks. It is likely both stations would require park-and-ride facilities to encourage motorists and cyclists to use public transport.
Leven would be connected to Glenrothes-with-Thornton junction (as part of the Fife Circle). This operates half-hourly services, involving journey times of around 1 hour 10 minutes to Edinburgh Waverley, 20 minutes to Kirkcaldy and 40 minutes to Dunfermline. By changing at Kirkcaldy, it should require no more than a  one hour journey to Dundee or Perth. Rail connections allow Levenmouth residents easy access to the entire national rail network and the freedom to go anywhere we are presently denied.

6. When will rail services be reinstated?

Cabinet Secretary for Transport Michael Matheson committed to the line reopening by 2024 at latest but it is now expected to be in 2023..

7. Will this line extend to the East Neuk and St Andrews?

This is unrealistic so is not part of the Levenmouth Rail Campaign. Sections of this stretch are already built over or no longer intact while the small population along the line would not justify the scale of investment required. The stations at Leven or Cameron Bridge will therefore serve the wider southern East Neuk.

8. How can I get involved to support the campaign?

9. When and why did the line open and then close?

The first railway line in Fife from Burntisland to Cupar opened in 1847 and rail traffic began replacing travel by steamship (Edinburgh to Largo) and stage coach.
Following the 1852 Leven Railway Act, the Leven line opened on 5th August 1854. It was extended to Lundin Mill in 1857. In 1861 it amalgamated with the East of Fife Railway (the St Andrews railway started in 1851, and was extended to Anstruther in 1863).
The line was run by North British Railways from 1877, then by LNER from 1923 then as nationalised British Rail from 1948. It is presently owned and managed by Network Rail.
Although the Thornton-Leven stretch was not recommended for closure under the Beeching report, services across Fife fell victim to swingeing cuts to the branch line network which followed. The last train to run from Leven to Thornton was on 4th October 1969.
Freight trains continued on this line continued serving Methil Power Station until 2001 – the heavy coal traffic required a high standard of trackbed which remains.